I got a little extra publicity this week from the Columbia Journalism Review when its editors illustrated their open letter to President Trump from the White House press corps with a photo I took of the White House press briefing room. It’s been flattering to see that people actually read photo credits! I would have liked to see CJR link to the original–I believe that’s a condition of the Creative Commons non-commercial-use-allowed license under which I shared it on Flickr–but the reply I got was that their CMS doesn’t support links in photo credits.

That photo, incidentally, comes from 2014’s White House Maker Faire–exactly the sort of event I don’t expect to get invited to over the next four years.

I talked with Techdirt founder Mike Masnick about my experience at this year’s show. I did the interview using a podcasting Web app I hadn’t tried before, Cast. My verdict: great UX, but that name is horrible SEO. 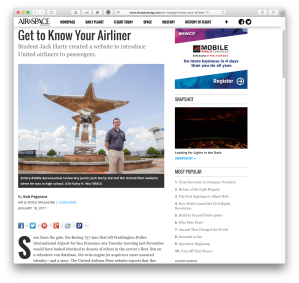 I finally wrote a story for a magazine I’ve been reading on and off since high school, which is pretty great. The subject: the United Airlines Fleet Website, a remarkably useful volunteer-run database of United planes that I’ve gotten in the habit of checking before every UA flight. The story should also be in the February issue, available at newsstands in the next few days.

1/18/2017: What you should really know about every major hacking story, Yahoo Finance

I put on my media-critic hat to write this post about what too many cybersecurity pieces–and too many mass-media conversations on the subject, up to and including those started by Donald Trump–get wrong.

We decided last summer that having separate guides for the four major wireless carriers and for prepaid and resold phone plans didn’t help readers who should be considering all of their options. That also imposed extra work on me. The result: a single guide that’s much shorter and will be easier to update the next time, say, Sprint rolls out some new price plans.

The real test of the big four networks came not during President Trump’s under-attended inauguration but the Women’s March on Washingtoh the next day. To judge from the experience of my wife and others, the carriers did not acquit themselves too well: Her Verizon iPhone lost data service for part of the day, and I saw friends posting on Facebook that they couldn’t get photos to upload.

T-Mobile’s decision to limit its postpaid offerings to the unmetered-but-not-unlimited T-Mobile One gave me an opportunity to provide a quick tutorial on the differences between postpaid, prepaid and resold services.

My business travel for the year officially wrapped up with my return Friday night from a brief but meeting-packed trip to NYC. If I spend any other nights out of town for work before CES 2016, somebody else will need to be paying.

In other news: Welcome, new readers interested in Syrian-refugee politics and/or USB-C accessories! Should you keep reading, each Sunday you will find a recap of where I wrote or spoke or was quoted; at least one more day in the week sees me writing about some other thing that doesn’t fit at my usual outlets.

11/17/2015: Cross-Device Tracking: How the Ad Industry Will Follow You Wherever You Go, Yahoo Tech

A workshop hosted by the Federal Trade Commission Monday gave me an opportunity to write about a topic I’ve been following for a while. 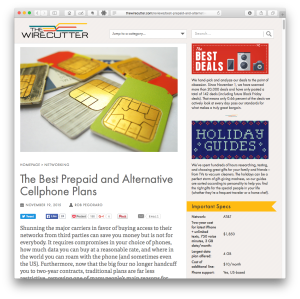 My third guide at this site covers both prepaid and resold (aka “MVNO,” short for “mobile virtual network operator”) wireless service, and it was many months in the making. Please read the comments; I spent part of Friday morning answering the first round of reader feedback, and I’ll be back there Monday or Tuesday.

Yes, I’m old to cover anything involving Justin Bieber. But after getting a prompt in the Lyft app to partake in this promotion, I couldn’t not write about the weird intersection of the ride-hailing service and the Canadian pop star.

My self-serving motivation to write this column was my own curiosity over when the phone chargers handed out as tech-event swag will feature USB Type-C connectors to match the hardware on my new phone. Before you mention it: Yes, I’m aware of the typo in the headline, and we’ll get that fixed soonest.

This was an unusual week: For a change, it was my wife out of town on business and me doing the solo-parent thing at home. If you were wondering why I seemed absent from Twitter in the evenings, there’s your answer.

11/18/2013: Tech Exceptionalism with a Dose of Reality, Disruptive Competition Project

This was the essay about the Techonomy conference that I mentioned in last week’s recap. I hope the repeated rewrites paid off, but you can be the judge of that. Also unclear: Whether my skeptical take will get me uninvited from the conference next year. 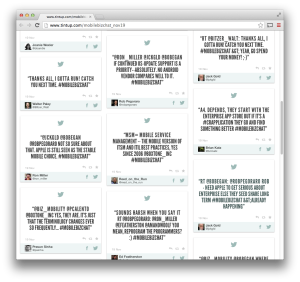 After a few weeks off, I rejoined IDG’s Twitter chat series. In this week’s installment, we talked about ways organizations can make their mobile apps less awful, which at one point led to me using the phrase “reeducation camp.”

This post came to mind after noting the arrival of a couple of cheap-but-good unlocked phones, then spending a couple of weeks trying out Republic Wireless’s new version of the Moto X… and then failing to sell a review of the latter item to an outlet that I was sure would be interested in it. Sigh.

A reader query about bringing a paid-up, out-of-contract Sprint iPhone to a prepaid carrier gave me an excuse to talk about phone-unlocking policy issues–and possibly get one Sprint reseller in trouble.

On Sulia, I called out a phone-unfriendly invitation from Amazon, said that mobile-malware metrics mean little without breaking out how many bad programs make it into default app stores, questioned the value of smaller, discount-priced 4K TVs, scoffed at the idea of Comcast buying Time Warner Cable, and shared some disturbingly inconsistent results from a Verizon Wireless mobile-broadband hot spot.