After a month and a half with no travel aside from one overnight trip, I’ve got my next international departure in five days: Web Summit has me moderating at least three panels and will have me busy watching everybody else’s in Lisbon the week after this. Which once again means I will once again be spending Election Day overseas.

(There may “only” be statewide races at stake this time, but I cast my absentee ballot three weeks ago anyway. New Jersey and Virginia voters–and anybody with even a local race on the ballot–show up and do your job as a citizen.)

This update to my Wirecutter guide adds my thoughts on Microsoft’s new Surface Pro and Apple’s latest pair of iPad Pro models. I was harsher about the Apple Pencil this time around even before I managed to lose one on our coffee table.

I thought the hosts at D.C.’s all-news radio station would spend more time quizzing me about the camera notch at the top of the $999-and-up iPhone X’s screen or the Face ID login system that camera offers, but instead they focused mainly on its price. 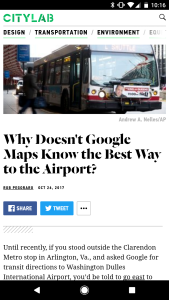 My first appearance at The Atlantic’s transportation-and-development site since 2013 (when it went by the name The Atlantic Cities) was originally going to be a cranky post here about Google’s continued inadequacy with transit directions to Dulles Airport. But then I thought I should try to be a little more enterprising about that idea. It took just long enough to get the post written and edited that Google finally added IAD’s Silver Line Express bus–but in a botched way that incorrectly advises walking another .7 miles after exiting the bus.

The Honest Ads Act is a good idea and worth passing even after Facebook and Twitter’s belated moves towards transparency about their advertising, but it’s not going to stop all the social-media engineering the Russians put on last year.

Writing about Federal Communications Commission chair Ajit Pai’s moves to open up media-ownership restrictions got me thinking about how an earlier FCC made it so much easier for out-of-town conglomerates to roll up radio stations.

This was going to focus on Apple’s neat but undocumented way to share a WiFi password from one Apple device to another (if each runs its latest mobile or desktop operating system), but my editor asked me to broaden the column to cover non-Apple use cases.