I didn’t set out to vanish from Twitter this week, but I became all but invisible anyway. First I decided that free-but-slow T-Mobile roaming in Israel was good enough, then I had a round of meetings and visits in places with little to no cell signal and no free WiFi, then my phone spent a couple of days not getting a signal at all until I gave in and rebooted it. Meanwhile, the seven-hour time gap between Israel and the East Coast left a minimal audience for anything tweeted before mid afternoon, which further discouraged me from jumping into Twitter.

1/25/2016: Sprint and T-Mobile Backtrack on Crazy iPhone Lease Deals — and Why That’s Good for You, Yahoo Tech

This story came out of fact-checking for an imminent revision to my Wirecutter guide to the wireless carriers. My “huh” realization that Sprint and T-Mobile’s lease options no longer saved any significant money compared to buying a phone outright was followed by my surprise at seeing that nobody had covered this shift in the market. 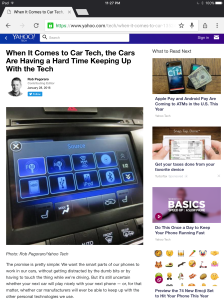 This sequel to last year’s assessment of car-smartphone connectivity doesn’t find me much more optimistic about where the auto industry’s heading. If you’d like to cheer yourself up by looking at a picture of a crash-test dummy or a Toyota Mirai fuel-cell vehicle paying homage to Back to the Future, see my Flickr album from the Washington Auto Show.

A reader’s question about whether she really had to rent a cable box for every TV in her home arrived only hours after Federal Communications Commission chairman Tom Wheeler pledged action to open up the cable-box market. My answer to this reader: You do have fee-free options for your secondary TVs at home, but they depend on your cable or satellite provider and are often not that good.