Tuesday was a busier day than usual for me on Twitter. Yahoo Tech ran my column decrying the vicious and creepy harassment of a few women in or connected to the gaming industry by what I called a “nutcase fringe” of “GamerGate”–and, more important, Twitter’s failure to take some basic steps to make itself less harassment-friendly–and my Twitter notifications promptly blew up. 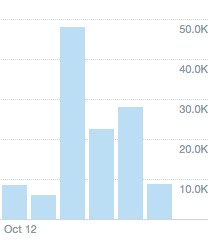 The GamerGaters who showed up there–and in the post’s comments thread and on my Facebook page–were not amused. I spent most of the morning replying to those tweets but then had to turn my attention back to work. So for anybody who’s been waiting for a reply–or would like one exceeding 140 characters–here are my responses to the most common comments on my column.

Why didn’t you write about the doxxing and harassment of GamerGate supporters?

That’s the fairest point I’ve seen made. But this was a column about the history of harassment on Twitter–which has seen women take by far the worst abuse, as I noted in my mentions of Kathy Sierra and Adria Richards’ ordeals–and the service’s ineffectual response to it. I could have and should have written it months ago; the attacks on GamerGate opponents represent just another chapter in the story of a part of online culture that needs to die.

Plus, I have seen no credible evidence that harassment of GamerGate supporters has been as prolonged and vicious as that of Zoe Quinn, Brianna Wu, Anita Sarkeesian and other female critics of GamerGate.

(To anybody who’s been hit with death threats on Twitter, I’m sorry. Nobody should be subjected to that crap for speaking their mind. To those sending those threats: What the hell is wrong with you?)

This is about journalism ethics.

Those of you saying this, I believe you. But I also don’t get where you’re coming from. The massive influence AAA game publishers have over the gaming media and the willingness of some writers to suck up to them have been a glaring issue since the 1990s–back when I was writing and editing game reviews at the Post myself–and now you’re up in arms over a game nobody had heard of, Quinn’s Depression Quest, getting a little publicity? You’re saying the real sickness in gaming media, the reason to grab the pitchforks and torches, is the relationships some indie developers have with individual writers?

Oh, and the chat logs showing this meme was cooked up by a bunch of 4chan trolls using sockpuppet Twitter accounts display little concern about journalism ethics.

(Note also that the GamerGate outcry over the phony allegation that sleeping with a game writer got Quinn a favorable review of Depression Quest has led to the game getting about a billion times more mentions than it would have received otherwise.)

We just want the politics taken out of game journalism.

Not everything has to be political. But if you take gaming seriously as a creative endeavor–a goal I remember most game-industry types supporting back in the ’90s–it’s delusional and incoherent to declare it exempt from any political scrutiny.

If you don’t appreciate Sarkeesian’s feminist critique of games, you can read somebody else’s–most reviews don’t put games in any social or political context, same as many write-ups of music, movies and books. Or write your own.

We’re tired of SJWs imposing their agenda on the gaming industry.

That’s “SJW,” as in “Social Justice Warrior.” Beyond the silliness of that supposed insult (me, I think it’s good to care whether an industry marginalizes people who could make it better), the idea that feminists are in a position to order around the game industry or any other segment of the technology sector is laughable.

The subtext of some of these objections, that the gaming industry does not need to change, troubles me much more. Historically, the majority culture in America telling a minority culture “can’t you just pipe down and let us keep things the way they are?” has led to some darker chapters in our country’s history.

There is a history of unjustly blaming video games for real-world violence, but that complaint hasn’t been brought up much by GamerGaters. And now that a threat of a school shooting led Sarkeesian to cancel a planned appearance at Utah State University–campus police told her they couldn’t check attendees for weapons under the state’s concealed-carry laws–it would be awkward to bring up that.

(The game industry hasn’t done itself a favor by shying away from that argument, as game designer Daniel Greenberg—a friend and, years ago, one of my better freelance contributors—argues in this post at The Atlantic.)

The publicity over these attacks is unwarranted; those women should have just ignored the trolls.

The accounts of people who have been hit with repeated, graphic threats of rape and death indicate no such thing is possible. Not having had to endure such a thing, I’m inclined to believe those who have.

Another thought: It would have been an interesting experiment to publish my column under a female byline and a woman’s photo.

If you can’t tell the difference between governments arresting people for their speech and a corporation deciding on the rules of its own social network, you’re an idiot.

We’re not misogynists. We value diversity and welcome women, and there’s no evidence GamerGate is behind any of the attacks.

I believe you when you say that. But a non-trivial proportion of the pro-GamerGate testimony I’ve seen has exhibited sexism of varying levels of toxicity, from saying Quinn reached “the top” (as if she’s now EA) “on her back” to calling complaints about GamerGate “stupid feminist BS.”

And some of the most public supporters of GamerGate are outright cretins, from actor Adam Baldwin (who earlier wondered if President Obama wanted to bring Ebola to America) to writer and professional jerk Milo Yiannopoulos (last year, his mockery of complaints about female underrepresentation at tech conferences ran under the headline “Put a sock in it, you dickless wonders”).

And all the way at the nutcase fringe, you have the creeps on 8chan plotting these attacks. This is the problem with calling a hashtag a movement: How do you kick people out of GamerGate when they say they support it too?

As for people who actually make games, an increasing number of them don’t want anything to do with this mess.

We’re tired of being demeaned and stereotyped in the media.

I get it: You don’t appreciate stories like Leigh Alexander’s “‘Gamers are over” post at Gamasutra questioning whether there is a “gamer” identity and whether it has anything redeeming to offer. But having spent most of the last decade reading about the demise of my own occupation, I have to say: If you want to call yourself an oppressed class, get in line.

Meanwhile, what has GamerGate itself done to the image of gamers? Does the rest of the world think you’re a saner lot with a more secure grasp on reality now? Do they think you’re a more pleasant bunch to hang out with? I will bet that they don’t. And that GamerGate will wind up as one of the most counterproductive attempts at a PR campaign since the Iraqi Information Minister.

12 thoughts on “A grab-bag of #GamerGate responses”